Dressing up with the Night King costume or any other of the “regular” White Walker costume is probably the most fitting Game of Thrones Halloween costume. While obviously you can wear a Daenerys Targaryen costume or a Jon Snow costume, Halloween is the night of horror, spooky outfits and things. And what can be more spooky than the undead, icy walkers and their leader, the Night King. There are several high quality Night King masks and even a few different options for the Night King costume. But Halloween is not the only time you can and should wear this infamous character’s costume. True, you would probably get a few raised eyebrows if you wear it while standing in line at the bank or shopping at Target. But there is always a cosplay opportunity or a Game of Thrones party to go to. 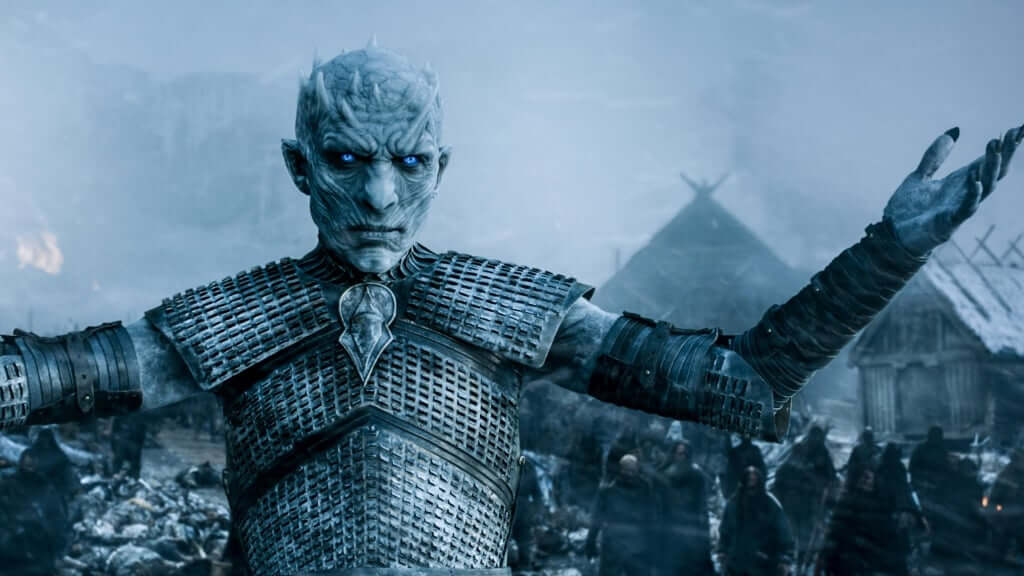 Who is the Night King

The Night King is the leader and the first of the White Walkers. He has the White Walkers and the Army of the Dead following his orders. He has many supernatural powers and abilities that make him a frightening character and a very difficult to face opponent. Among his powers there are the ability to raise zombies from the dead bodies that were not burned and recruit them into his army. The ability to touch someone and make him into a White Walker. He can break normal steel weapons, resist to fire (even a dragon fire) and more.

The Night King looks different than the rest of the White Walkers. Although both have the infamous blue eyes and the white wrinkled face, the Night King head has spikes that goes out of his skull. The nature of those spikes is not clear and it is also not clear where did they come from or how. He wears a black leather-ish armor with a strange looking pin and he can fight with both swords and spears.

There were actually two different actors who played the role of the infamous Night King. Between seasons 1 and 5, it was played by Richard Brake. Starting from the sixth season, it was played by a Slovak actor named Vladimír Furdík. Check out the Game of Thrones cast in real life to see how he looks like without the Night King makeup.

There are few easy ways to have the Night King Halloween costume. Other than creating the outfit by yourself which can be quite cumbersome, if you choose to purchase this outfit, you have to obtain two important parts. The Night King armor and the Night King mask. With those two parts, you will 99% achieve your goal and most will stop here. Others, might want to add the pin and hands.

The most detailed Night King costume currently available to buy. The price is relatively high which would probably cause many fans to turn away and look for something else. Made from premium quality synthetic leather. Available in many different sizes.

This is not exactly the armor the Night King wears in Game of Thrones but it is very close and if you are using the full head mask, it will be clear who you are trying to look like. Not to mention this one is cheaper than the previous option.

This is a very high quality Night King full head mask. It's made from 100% rubber and was sculpted by a professional FX artist. The deep blue eyes you see in this picture are part of the mask so all you brown eyes Night Kings have nothing to worry about.

A great add-on item for the Night King costume that is usually being overlooked. This pin is very similar to the pin the Night King wears below his neck.

If you wish to become the necromancer to raise the dead to an army, you need to start with a pair of hands. And those will do just fine. Together with the costume and the mask, you have everything you need to have in order to create the endless night.

Who Created the Night King and How?

It was only at the middle of the sixth season of Game of Thrones that we learn who created the Night King and how. In that scene, Bran is during his training with the Three-Eyed Raven and he sees the vision of how the Night King was created. He sees the Children of the Forest capturing a human man, tie him to a tree and stick a Dragonglass into his heart. As the Dragonglass enters his body, his eyes become blue and he turns into the first White Walker. 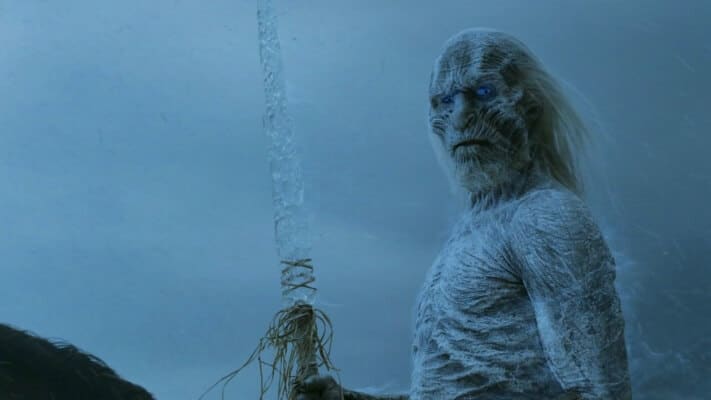 Getting the White Walker costume can be a little harder or a little easier depending on which version you want to be. As some of them are walking around partially naked, it will required from you to put something on the upper body in order to achieve that look. Alternatively, you can use the Night King armor with a White Walker mask and sword.

Just like the Night King mask, this white walker full head mask was sculpted by a professional artist. It is an officially license Game of Thrones merchandise. It has the white long hair in the back of the head. Made from 100% rubber.

A White Walker chest piece. Can be worn above the clothes. Combine with the White Walker mask and hands to get the complete look.

A great pair of White Walkers hands. It will fit most adults. Molded latex hands extend approx. 6" above wrists. This is a great add-on item if you have the mask. Officially licensed.

This officially licensed Game of Thrones merchandise is molded of translucent rigid plastic. It is shaped like a shard of ice. Just like the White Walkers have. It is 40" long so be careful.

What Are White Walkers?

We are getting to know the White Walkers very early in the show. Actually, they were in the first scene of the first episode that opened the Game of Thrones show. First, we only know that they are undead, bring cold and ice with them and have blue eyes. It was only later we learn that there are many of them, created by the Night King and following him together with his Army of the Dead. They were hiding for thousands of years in the far north where it is too cold for people to settle, until they became a myth, a legend. When the show starts, that is when they are starting to go south and initiate their second attack on the living. The first attack was the Long Night, in which they lost.