Sansa Stark had to go through a lot during the 8 seasons of Game of Thrones. Similar to her sister, Arya, Sansa experienced many difficult situations and suffered tremendously between the time she left Winterfell, and the time she returned home. When she left, she was a spoiled little girl, day dreaming about marrying the beautiful prince, Joffrey Baratheon. That prince quickly turned out to be a monster. Unfortunately, things only got worse from that point for her. The things she had to go through impacted the way she dressed as well. In the early seasons, Sansa’s clothes were colorful, a lot of pink and purple. In the later seasons, they are mainly of dark color and mostly black.

Although both are strong leader women, Sansa Stark costumes are different than Daenerys Targaryen costumes and even different from her sister, Arya’s costumes. She didn’t wear much jewelry towards the end of the show and mostly wore the circle necklace. That necklace is not easy to find, but it comes in most of the Sansa’s outfits we show below. Whether you are looking for a Sansa Halloween costume or something for a Game of Throne theme party, check the options below to find something that fits you. 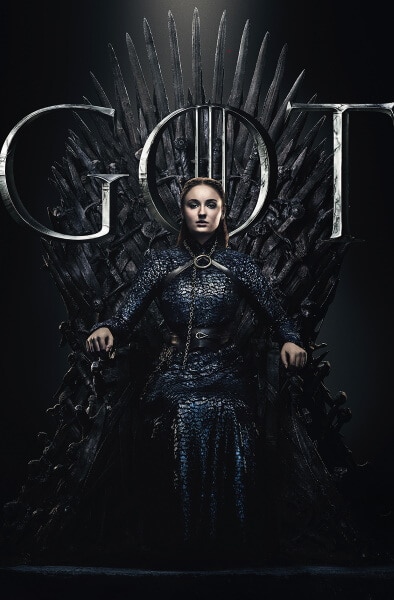 This is one of the more impressive Sansa dresses we see her wear. Actually, we don’t see her wears it during the show but here, Sansa on the Iron Throne is nothing short a strong, leader woman. That look is very different than the “little bird” (as The Hound used to call her) she was earlier in the show.

Ever since she escaped Ramsay with the help of Theon, her inner strength grew stronger. She firmly stood her ground when talking to Jon and Daenerys but perhaps the key moment, was the trial she held for Littlefinger.

She rightfully earned her crown as the queen in the north as she detached the north from the Seven Kingdom of Westeros into a separate kingdom.

This is a very impressive dress that got all the parts for a great Game of Thrones Sansa costume. The set includes the dress, the belt, the long Sansa necklace and the straps.

Like many characters in the Game of Thrones TV show, Sansa also changed her hair a lot during the show. This wig is the closest possible for the way she had her hair in the second part of the show and are a great add one for the Sansa costume. 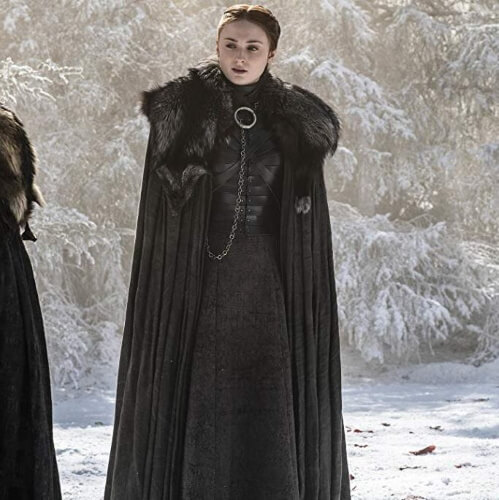 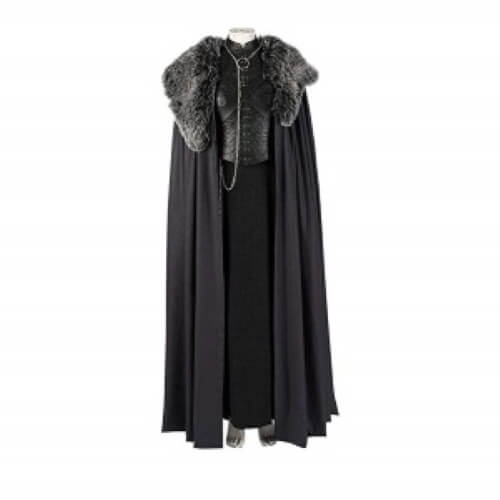 We see this Sansa outfit a few times in seasons 7 and 8. This outfit is a combination of a black semi elegant dress, black cape with fox fur on the shoulder but the twist is the top part which is made out of straps of black leather and provide the look and feeling of an armor. The Sansa Halloween costume that was created for this look is a great set made with high attention to details and looks very similar to the original. The set includes everything you will need: the dress, the cape, the leather-like vest, the famous Sansa’s necklace, the straps and even black gloves. If you buy this Sansa costume, you are all set to go. The only thing you have left is to rule the north! 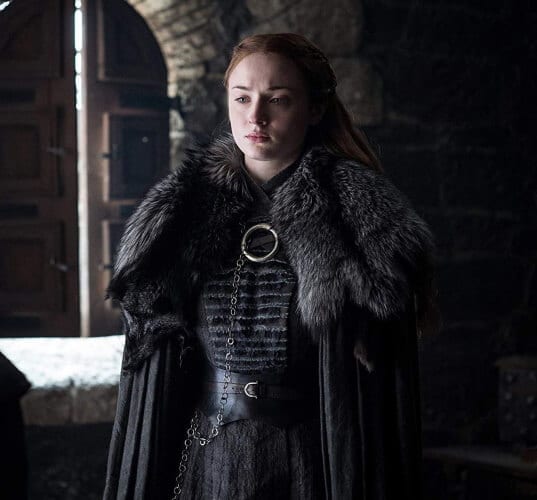 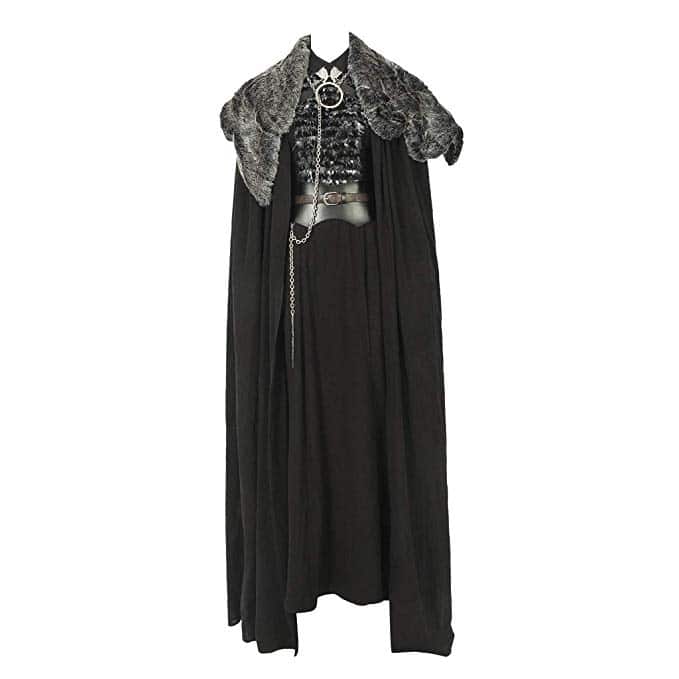 Another dark Sansa costume. This one has more fur elements. In addition to the fur she usually wear on the shoulders, this costume has the faux fur on the chest part. This one also includes everything you need for the complete Sansa outfit. Buying this set you will receive the black dress, the faux fur vest, the belt, the cape with the fur shoulders, the necklace, the black gloves and also the two direwolf neck wraps you can attach to your outfit. Another important factor about this Sansa Stark costume is that it is especially created for each order based on the measurement provided by the buyer. Kind of like having your own tailor.

This is another (cheaper) alternative for Sansa Stark costume. Very similar to the previous one except that the color of the dress is a little different.

This is another wig alternative. The hair is brown and it has two braids from the front, going all the way to the back.

Those leather gloves will help you complete the all black look you are looking for. They look great and even touchscreen enabled. Just like in Winterfell.

While this didn't appear on the show it might help someone who is looking to complete the look of a Stark girl.

This pink dress is a copy of Sansa outfit in the first season of Game of Thrones.

This wig is similar to the way Sansa hair was in the early seasons.